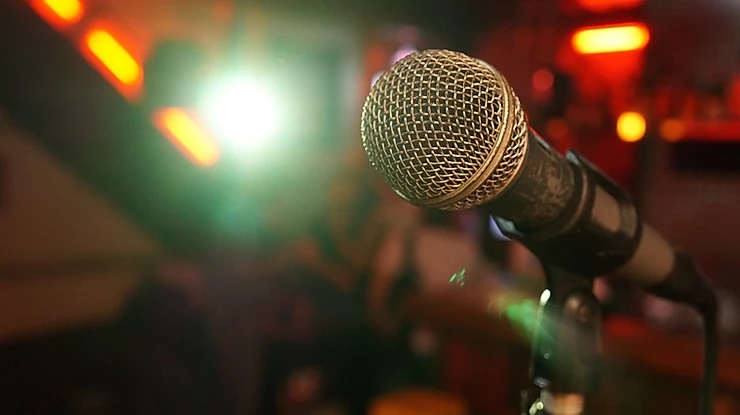 For many people, the idea of doing improv comedy, or even stand up, is absolutely terrifying (myself included). But for people who struggle with social anxiety, it seems to have a very positive effect. It all comes back to us being willing to put ourselves in situations that cause anxiety, so that we can learn how to manage these difficult feelings in a more positive way. So I decided to do just that and signed up for a local improv course.

What is Improv Comedy and is it Worth the Stress?

Improv is a type of theatre in which everything that is said and done is made up on the spare of the moment, often leading to a hilarious ending. The classes are warm and supportive environments. Everyone is there to learn and to encourage each other to improve. For that reason, it´s an excellent opportunity for you to put yourself into a position where you are probably going to feel some anxiety, but within a healthy and positive environment. I was fascinated by improv, both from a comedy perspective, but also through an anxiety treatment focus, so I decided to go and give it a go. Turning up to the class I remember asking myself what on earth I had, but as soon as I met the teacher and the rest of the group, I soon relaxed. We started off by playing ice breaker games and to my own surprise, before I knew what was going on, I was having a real laugh with the rest of the group.

Then we split off into groups of three, doing more improv games, like telling a story, where each person has to tell a part of a story and finish their sentence with ´and then ´, allowing the next person to continue it as they wish. The stories ended up seriously weird and creative and even if I was still feeling some anxiety, I new that it was ok, that I could feel this anxiety and still do these activities. As the class progressed we acted out mini scenes in front of each other and reported back on how we thought it had gone. Everyone was incredibly positive and supportive and this created a group atmosphere in which you felt you could take a bit of a risk, without their being any major repercussions. One teacher commented that “ When people gain the experience of making lots of mistakes where the consequences are positive rather than negative, they start to accept risk and embrace it.”

Improv theatre can be great for anxiety as it allows you to face your fears in a positive way.

At the end of the class they told us that, in ten week’s time, to celebrate the end of the course, we would be performing an improv show at a bar in the centre of Barcelona. This was news to me and I instantly felt a pang of dread in the pit of my stomach, but then I decided that actually this would be a really good test for me, a way to continue to feel anxiety in a positive way and to learn to accept it. For years I had been fighting with anxiety and now I was learning a different way to relate to it. As the classes continued I watched as my anxiety would spike just before I performed, but then slowly return to normal once I got on the stage and started. I practiced allowing the anxiety to be there, whilst focusing on the job at hand.

In the CNN article entitled ´How an Improv Class is helping the Anxious´ one anxious improver claims that “Oftentimes, when we’re feeling anxious about something, we avoid the things that make us anxious. This class provides people with the skills where they’re getting more comfortable being uncomfortable.”I had two major fears during this time. One is a fairly obvious one often used to follow me around everywhere I go, namely losing control and having an anxiety/panic attack in front of a group of people. The other was was being in front of an audience and not being able to think of anything to say.

With improv being exactly what it says on the tin, i.e. improvisational, you can´t have anything prepared in advance, you just need to think on your feet and find the right words in the moment (often it doesn´t matter what you say, just as long as you say something). I had horrendous visions of myself standing on stage, desperately looking for the right line to say, as the audience squirm uncomfortably in their seats. To be fair this is a common worry for improvers and choosing to put the worry to one side and take the advice of the teacher, I focused in on staying present when performing and allowing the process to unfold naturally. As my teacher kept telling me, the subconscious mind always knows what to say or do and we should learn to trust it. Whatever comes up in the moment is the right thing to say and it doesn´t matter if it´s funny or not, the idea is to keep the scene going until it naturally comes to a conclusion (sometime scenes can even be serious and sad).

You learn to have more trust in yourself and that you will find a way to cope with the pressure.

As I kept on practicing it became more natural to me and I was struck by how applicable improv could be to day to day life. So much of the time we second guess and question ourselves, instead of trusting our instincts and saying what we think (within reason) and improv seems to help with this too.

The Day of the Show

As we got closer to the final show I found myself feeling more confident in the group and noticed that I often had less anxiety. This was great, but I had to remind myself that not feeling anxiety was not my aim here. My goal was to allow any anxiety that showed up to be there, whilst I focused on performing. I think the regular practice had allowed me to internalize a lot of the skills needed and I felt more or less ready.

On the day of the show I woke up early feeling nervous and the feeling only grew throughout the day. I arrived early at the venue to meet up with the rest of the group. In improv there is a big focus on group responsibility and for the show to go well, you all need to try and support each other as much as possible. So as we went back stage to warm up there was a lot of backslapping and positive chit chat going on. The bar started to fill up and soon we were waiting to come on stage, with a decent audience of 50 people (mostly friends and family) to watch. My anxiety suddenly started to peak and I remember fighting the urge to get the hell out of that bar as soon as I could. I wanted the floor to swallow me up.

You may not be a comedy genius, but with practice you may be funnier than you think.

But I stuck to it, noting the anxiety and refocused my mind on the job at hand. The next thing I new I was on stage and already performing and making people laugh. Whilst still onstage I started feeling a surge of good feelings, pride and excitement in what I had achieved and respect and kinship for the rest of the group. My anxiety went up and down throughout, but at no point did it stop me from doing what I wanted to do and for the most part, once we got started, it barely bothered me at all.

So there we have it, my story of improv, something I thoroughly enjoyed and will definitely do again in the future. I think it has helped me to trust in myself more and to know that whatever difficult problem might come up in the moment, there will always be a solution available, as long as i´m willing to stay present and focus on the job at hand. I think it can be helpful for all types of anxiety, but might be particularly useful for people who struggle with social anxiety. Let me know what you think and why not give improv a go.